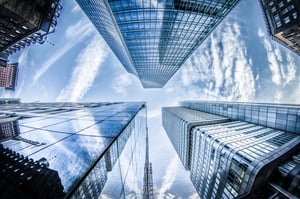 Recently, the business world has rushed to cloud platforms with incredible fervor. The excitement is not without reason. The business world is currently undergoing a CEO-led digital transformation, casting light on the reality that information is an organization’s lifeblood. When it comes to storing reams of data, the cloud offers versatility, flexibility, and options. It’s worked so well for so many businesses that it’s often considered a no-brainer in industry across the globe.

Shock of the New: Technological Modernism

In this way, everything cloud-based is tech “modernism.” Like the modernism movement that arose in the Western world over a century ago as a reaction to the new, unimaginable power of industrial might, cloud technology is a reaction to rapid recent growth of the individually-controlled, collectively-networked digital world.

The idea of “cloud computing” has existed for at least two decades—an eternity in internet technology. The term was coined in 1996 but did not spread until about ten years later.  By 2011, “cloud computing” had transcended buzzword status to become a universal marker of technology progress. The National Institute of Standards of Technology (NIST) published “Special Reports” and created a reference architecture. The report laid out the concepts of Infrastructure-as-a-Service (IaaS), Platform-as-a-Service (PaaS), and Software-as-a-Service (SaaS), as well as public, private, community, and hybrid cloud models.

I remember in 2003, during my tenure at IBM, working on the “on-demand operating environment” initiatives, promising “on/off capacity on demand.” There was head-scratching by both clients and strategic teams; however, it was generally understood that cloud was the future for enterprise technology.

This structure was so intuitive that it almost needed not be questioned. It reflected the pay-for-what-you-use ethos that resonated with the business user who needed to type a document, send an email, make a call, and join a meeting—as well as the consumer who wanted to pay a bill, shop for clothes, watch a show, and scroll through their photos—from their smartphone, their personal laptop, and their work desktop, all without a disruption in service. Why wouldn’t everything be on the cloud?

When the answer to everything becomes one thing, critical thinking demands a new path. Lost in the rush-to-cloud shuffle is one crystal-clear truism—that, effectively, no business user of an application stops to think on which platform it is delivered, just as no entrepreneur designs a value proposition around the cloud. The cloud is, instead, merely a way to optimize operations. Cloud computing may perform a central, overlapping role in the balancing of the business use case with the systems use case with the customer use case, but rarely would it be the sun around which all business entities revolve. It is not raw energy as much as a battery casing that stores energy.

At its core, the cloud remains, functionally, a technological system. But the fact that it has been successfully marketed as a near-revolutionary service in and of itself should be reason enough to question the reasoning behind it.

We can see analogues in the way we think about other entrenched business models. For instance, in the US houses are often thought to be for sale, while apartments are for rent. This was the conventional wisdom for decades—a mindset that has started to change due in part to large-scale economic conditions like the housing crises that led to the Great Recession. But the rent apartment vs. buy house question is ultimately a deeply personal question that ought to be based on an individual or family’s needs, like schooling, neighborhoods, personal finances, and more. Plenty of people can optimize their needs by buying an apartment or renting a house for life.

Critically questioning entrenched ideas shaped by large forces is especially difficult in technology because of speed. Blink once, and you’ve missed a mass migration. Political, cultural, artistic, and philosophical movements take generations to form and coalesce. Digital technology moves at warp speed. Cloud computing went from a neologism to full-scale industrial adoption in twenty years. That must be a sign that it’s here to stay, for everyone, right?

Cloud postmodernism is about bringing clear-headed thinking to the situation.

For Whom the Cloud Tolls

To paraphrase Hemingway—whose fiction helped pave the path from European modernism literature to American postmodernism—for whom does the cloud toll?

With its strengths of speed and flexibility, the cloud is uniquely suited for new, small applications run out of someone’s garage or a shared workspace. An enterprise that needs to get up and running in months has little reason not to get on the cloud. It can take advantage of the cloud’s flexibility to play in the sandbox with flashy tools, it pays only for what it uses, and it avoids the hassle and cost of storing all its data in a single on premise location.

Too often, the cloud delivery model and the concept of subscription software pricing get tied together. These things can vary independently; whether a business pays for something as a one-time-charge or pays for the period of its useful life is rarely a no-brainer. Most subscription models for software are based on a three-to-five-year useful life, for many applications this is fine—but in specialized systems, where longevity could be eight or even 10 years, the total outlay could be three times more. As above, this means financial planning takes a crucial role in planning the infrastructure.

Crafting the strategy for my own organization, taking a post-modern view of the cloud is paramount to driving client success. In driving value with enterprise B2B software, delivery models take a back seat, while user interface, platform integration, and business Return-on-Investment (ROI) lead. The conversation. Modern software platforms, especially data applications, need to address this anytime, anywhere, any device usage while solving for anyone, everyone user access at the same time.

Cloud post-modernism means that in the process of questioning the conventional wisdom, one also applies a new paradigm—don’t get caught up in the cloud but stay loyal to the business value and ROI goals you set forth in the first place.

This article originally appeared in ITProPortal*